Hi friends, I appreciate all of you who have been praying for Kendra and I. God has done some pretty amazing things for us recently, and I feel it's my duty to share, so God can receive all the glory for these victories. If you haven't read my last blog yet, you should go do that! I wrote about God's faithfulness in 2020. Short recap is Kendra and I have been scraping by (like a lot of people) but keeping the faith and asking that a breakthrough will soon happen. Well it happened! And there's TWO things to highlight. Let's dive in!

As a professional triathlete I train 20+- hours every week. It's hard to hold a job that has flexibility to become the best in the world. So I work a lot of part-time jobs to pay for the dream. Firefighting is career I have dedicated my life to behind triathlon. It's a beautiful schedule, with lot's of perks, and fulfilling duties. I have yet to land a full-time fire job anywhere, but have been working as a part-timer with a few different agencies over the years. I'm not surprised because Triathlon has always come first, and I'm okay with that. I am thrilled to announce that last week I was offered a full-time position with Rural Metro Fire & Rescue! Kendra and I feel completely blessed as our finances will no longer be an issue! Praise God! And thank for those you prayed for us.

The second amazing thing that has happened! As a professional triathlete I count on sponsorship contracts and support from companies who believe in me. I can't tell you how many times I've been turned down, ignored, or forgotten. I don't take it personally, because, it's part of the job and it's important that the company feels you're a good fit. All to say, I was talking to my wife about how I'm tired of reaching out to companies and being shot down. So we prayed to God that night that companies would reach out to me. A week later a man named Allen reached out to me. He and a couple of his partners built a brand new triathlon bike! He sent me a picture asked me if I would be interested in riding this new bike. I said YES! The bike looks SO SICK! I can't wait to share it with all of you, but right now it'll remain a surprise until January or February sometime! So a new Bike sponsor is the second amazing announcement!

I reached out to my apparel sponsor (Mach Apparel Triathlon) to share the exciting news about the bike! He was so stoked to hear about it and later that day told me he's going to send me to do wind tunnel testing in North Carolina with my race suit! So he and my new bike sponsor are going to collaborate testing both of there products in the wind tunnel! Now, that might not sound cool, but, IT IS! Not a lot of athletes can say they went into a wind tunnel!

(My last season on this steed)

To wrap this up; if you pray big prayers, and trust, and have a joyous heart through the worst of times, God is faithful and loves blessing his children with amazing things. But you gotta ask, and don't feel guilty about asking for the big stuff. He want's us to! So we can share these amazing stories of victory and triumph. He gave me a full-time fire job that is perfect for training & racing at the highest level. He blessed me with a new bike sponsor for the years to come. And there's so many more things that happened this week I could share, but, it would make this to long. With that, I love you guys and hope you all have a Merry Christmas and happy new years! Don't do 2021 by yourself. Matthew 7:7 "Ask and you shall receive". Also love this quote.. Shoot for the stars and you might land on the moon, it's better than standing still. 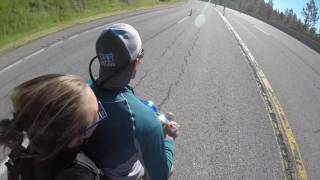